Late in the school year as I was driving Audrey home from school she said,

“I want to go to where daddy is buried.”

“I haven’t had his marker made yet, so the temporary one is still there.”

I took a deep breath, swallowed hard and was yet again, amazed by my daughter’s fortitude.

Back in February, only days after Roger died, I went to make his arrangements. The funeral director rather casually asked if I wanted to purchase the plot next to him? …What!? My brother and sister in law who so kindly came with me thought it was a good idea. Roger’s mother’s and father’s ashes are in a mausoleum at the same cemetery along with a cousin and of course I would like to be next to him sooo…. What the hey, right? I totally have already bought my plot! What a relief, cross that one off the list. It had been seriously hanging over my head along with the cable bill and the pile of laundry on the guest room bed.

As I later stood by my newly purchased plots, with which I was absurdly pleased, I kept picturing a time a hundred years from now when a graveyard looky-loo couple stops in front of my marker. The woman kicks the leaves off with the toe of her boots and says, “Gene? Jaheeenneee? Hey honey, what do you think? Jane? Shaynah?” When I mentioned this to the funeral guys they said, “Well, you can now have a radio frequency id tag on the headstone so that when it is near a cell phone the info is beamed to the mobile screen.” Rad!! (Not really) So for mine the looky-loo couple would hear my voice speaking very clearly, with a whiff of annoyance, “It’s jhaynah. Jhhhhaynah. Rhymes with Dana.” “Oh,” the woman would smugly say, “Rad. (Not Really)” and they’d share a laugh at my name’s expense.

Audrey and I arrived at the cemetery. I drove us to his resting place but couldn’t find his temporary marker. I was certain we were in the right spot. A path and the undeveloped forest were on the right. A tree was to the left and up a little but we couldn’t locate him. I thought they must have removed the temporary marker. There must be a time limit on how long they can leave it in place. I just haven’t been able to decide what the permanent one should say. How do I sum up his life in a couple of sentences that are to be etched in stone for all eternity? So far the best I’ve come up with is “Forever yours, faithfully.” Yes, from the Journey song! Our song. I played it and the rest of the greatest hits for him while he lay dying. They say hearing is the last sense to go.

So, even without finding the marker, I was sure Audrey and I were in the correct spot. I tried to convince Audrey that knowing the general area was enough. I tried to get her to sit and have a ‘moment.’ Well she wasn’t having any of it! She wanted to know exactly where her dad was buried! She set about trying to find someone who knew and was heading straight toward a family whose loved one was being lowered into their grave at that very moment. I convinced her to head toward the main office and then as I looked around, umm, she was right we were totally on the wrong side of the cemetery. All my worries about her squeamishness about walking over bodies were for naught. Her strong little legs tromped with purpose across grave after grave to her dad’s actual resting place. It was hard for me to keep up.

We found it. His temporary marker was there. The grass still formed a brown rectangle where the dirt had been disturbed. Audrey immediately lay down on that rectangle and tucked her knees up under her in “child’s pose.” Her cheek rested against the dry, prickly grass. She spread her arms as if to give him a hug and said, “I miss daddy.” Sorrow and fury filled my body. It was all I could do to keep my heart from flying out of my chest and exploding in the fresh spring air. And I said to myself, “Fuck it. We’re getting a goddamned puppy.”

…And so we did. Meet Rosie! 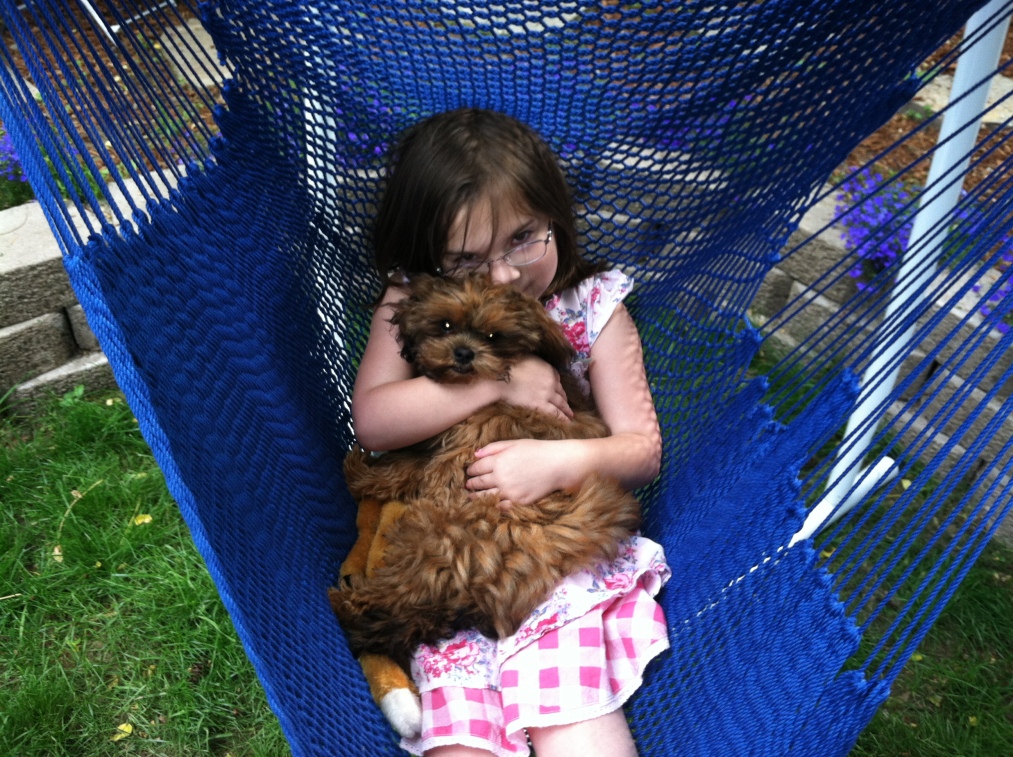 Her degree of adorable is almost embarrassing. Her poop stays pretty consistently outside the house. She likes a cuddle, is very mischievous and often highly entertaining.