The first time I saw the Albert Memorial in Kensington Gardens I thought that is a LOT of grief.  One hundred and eighty feet of gold gilded grief. It is incredible. Beautiful. …And profoundly sad.

Next, for your consideration, is Katie Couric’s early morning live televised colonoscopy, that followed the death of her husband from colon cancer. Yes, it’s okay to giggle a little, (The Daily Show’s coverage “Public Enema,” was pretty hilarious) but let it be said that she did in fact cause a sizable up tick in procedures.

Grief stretches your soul in ways you cannot currently imagine. I would be shocked if prior to her husband’s diagnosis Ms. Couric thought, “You know what I should totally do…..?! On network TV ….?!   That will be posted on Time Square’s jumbotron..?!!!

Six years ago, when we bought this house we said, “This is the house we’ll be in for the rest of our lives together.” (…aaaand the irony of that statement just hit me.) We intended to have another child. It was bought as a house for a family of four. After about a year we both started feeling like the house wasn’t quite “us.” We pined for our sweet little bungalow in LA. Roger even painted the living room in the same gold tone we once had so carefully chosen together for our old house. It just never felt right.

Then there were the miscarriages. We were not able to have another child. …so a house for three. Still much to celebrate!

I think A LOT about exactly when Roger’s illness began? Glioblastoma’s havoc is so swift they say one can’t last for long once inflicted. There is a possibility that he had a less aggressive tumor that over time transformed in to the killer it became. That is my theory. For quite some time something in our house just didn’t feel right. He was working incredibly hard growing a business and had less and less time for his family. He was retracting, disappearing. “Welcome to marriage,” I tried to tell myself but this felt like something else.

So, now it is a house for two ……and it has become my “Albert Memorial,” my “colonoscopy.” (Don’t think too much about that last one…) Since his death, I have learned to use power tools that I didn’t even know we owned. Power washer, ‘Mouse’ sander, Dremmel. The curtains that were not hung when Audrey moved into her big girl room are now up! Anchors and all. I have embarked upon one home improvement project after another and in the hours that pass in a decidedly meditative “Wax on. Wax off.”, state, I think about Roger. How he marked this house with his life. Although the chasm he has left remains unfathomable, I attempt to honor him through this work. I am never more comforted than I am here amongst the trees he planted and near his toothbrush that still sits in its dish.

The disease, the silent monster amongst us, that we had sensed and denied, has now wreaked its havoc. The aftermath that is left is in need of tending and in these small acts; I am creating the feeling of home we couldn’t manage to build while my sweet husband was alive.

I will refrain from showing you a photo of the garbage disposal, (I fixed it!) or of the blinds I pulled out of the crawl space and finally installed. But I would like to share with you a project of which, I’ll admit, I’m kinda proud. Keep in mind as you view the photos that I’m still WAY to vulnerable to hear criticism and that lying to make a widow feel better is an unequivocally acceptable practice.

Roger and Audrey assembled the chairs together in the summer of 2010. We never decided on a color. When Audrey and I were sitting on the bare wood chairs early this past summer she said the chairs should be blue like the sky and the table white like the clouds. Done.

I bought the cot at an antique sale and painted it white. The cushion, as well as a couple of the throw pillows, I sewed myself. First thing I’ve done since 8th grade Home Ec! Another thrifty find was the candleholder. Value Village and a can of spray paint. 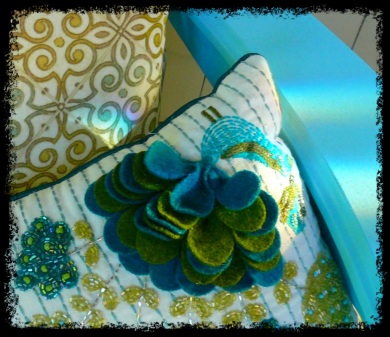 I designed and made the hanging candleholder myself. A few basic jewelry making skills.